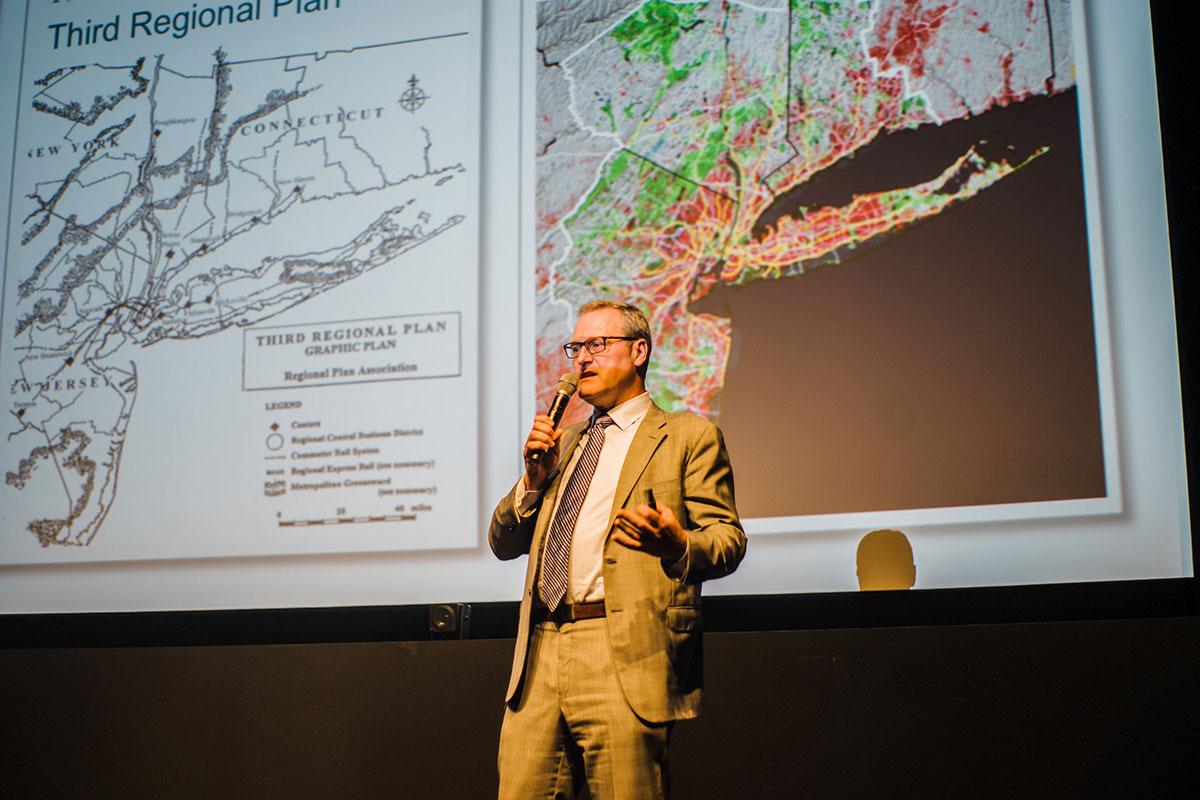 Throughout the presentation and conversation with Sarah M. Kaufman from NYU’s Rudin Center, Tom also touched on several topics and initiatives included in RPA’s Fourth Regional Plan. Here’s what he had to say about various policy proposals and infrastructural projects underway in New York City, which aim to drastically improve regional and local transit over the next decades.

On Congestion Pricing
“It’s going to generate we think about $15 billion for investment in mass transit and importantly, it should start to improve congestion. In Stockholm, when they put a policy like this in place, the number of children being admitted to hospitals for asthma dropped by 50%. The number one reason why children are admitted to hospitals in our country is because of asthma. The number one location where it happens is in the Bronx.”

On Fast Forward Plan
“The plan has four basic components, and the first that gets the most attention is transforming the subway. The key piece to that is improving the signals, so that the trains can run faster and more closely together because that’s the way you get more capacity out of the system than any other. There’s some talk about new technology, potentially working in tandem with what’s called communications-based train control. There are enormous problems with why it takes so long and costs so much to do these, and the system, if anyone tells you that there’s a simple solution to it, they’re lying because the problem with it is everything. It’s from conception to procurement, to paying for it, to contracting. Everything needs to be overhauled in that system.”

On the BQX
“I get excited about the BQX. This is the idea of a light rail system along the Brooklyn and Queens waterfront that could largely be paid for at a value capture, which is to say we’ve seen that where investments have been made in these systems in the past and you changed the end users and increased density and other things, you see that you can help pay for it.”

“If a community has good bones and is attractive, it’s going to be desirable, and not extending transit to it or not building new housing and especially affordable housing is not necessarily going to protect that community from the changes.”

On the Port Authority Bus Terminal
“They’ve released a report looking at three options for fixing the bus terminal. The bus terminal, currently, it’s about 175,000 people commuting in the morning and out in the evening. So, it’s even more than the folks coming on New Jersey transit.”“Of course, it’s been compared to the ninth level of hell. It’s a really tough place. It’s functionally obsolete. It’s structurally obsolete. It cannot deal with the capacity it has. It’s handling more people than it was built for, and it needs to be renovated and improved. How to do so is a very complicated proposal.”

On East Side Access
“For those of you haven’t, I’ll say the next time you’re at Grand Central and you’re looking at the clock and you’re thinking about how gorgeous it is, you got to look right down at your feet, and realize that about 100 feet below you, the MTA has carved a new terminal out of the bedrock. When it opens in about two and a half years, it’s going to allow Long Island railroad riders to decide every morning whether they want to go to Penn Station on the west side or Grand Central on the east side. We estimate that roughly 50% or more of the Long Island railroad riders will now get a one seat ride to their jobs on the east side instead of going to the west side.”

“It has been an enormously expensive project. There was a lot of complications with the construction over in Sunnyside, Queens. It has taken much longer than it should have. There are a lot of lessons to learn out of this, but the day this project opens up, it is going to transform the economy of Long Island. It’s going to push the commute shed that much further out east. It’s going to increase property values of homes around train stations. It’s going to incentivize developers to build more affordable housing around them, and it’s going to free up capacity in New York because that’s 50,000-60,000 people who are no longer going to Penn Station, crowding Penn Station and probably getting on the subways and coming back to the east side.”

“People are really drawn to rail transit when it’s affordable, when it’s safe, when it’s efficient, and especially when it feels shiny and new.”

On The Gateway Project
“The tunnels under the Hudson River are now 109 years old. They shift each day with the tide because they are not in bedrock, they are in the mock. I have been in them during the winter. There are icicles coming down off the roof of them. When you are underneath the Hudson River in a tunnel, you do not want to see an icicle on top of you because you wonder where the water is coming from, and they’ve flooded during superstorm Sandy.”

“So, Amtrak has had engineers look at it and, essentially, they’ve concluded that they can only slow the decline, but eventually in the next 10 to 15 years, they are going to need to close the existing tunnels to make major repairs and renovations to them. When they do that, it is going to be an economic catastrophe. So, what we need to do is get the new tunnels built before then.”

On Penn Station
“So, in 2020, Moynihan Station is going to open. It’s a great project. It’s the old post office to the west of the station across 8th Avenue. It’s great. It’s going to be a beautiful place, but it’s really only going to serve Amtrak and a couple of the Long Island railroad riders. It’s not going to suddenly fix Penn Station. I think it’s going to make people hungry for better public spaces, but it does not fix everything.”

“What we need to be doing is thinking about a Penn Station complex that can serve a million people a day. That’s got to be our goal. How do we create the capacity for that? I think that includes finding a home for the garden, a better one, an improved one. Maybe it will help them attract some star players, and probably expanding the footprint to the south. All of that has to be on the table.”

Major support for Open House New York’s The Moving City: Transportation Infrastructures of New York has been provided by the National Endowment for the Arts.