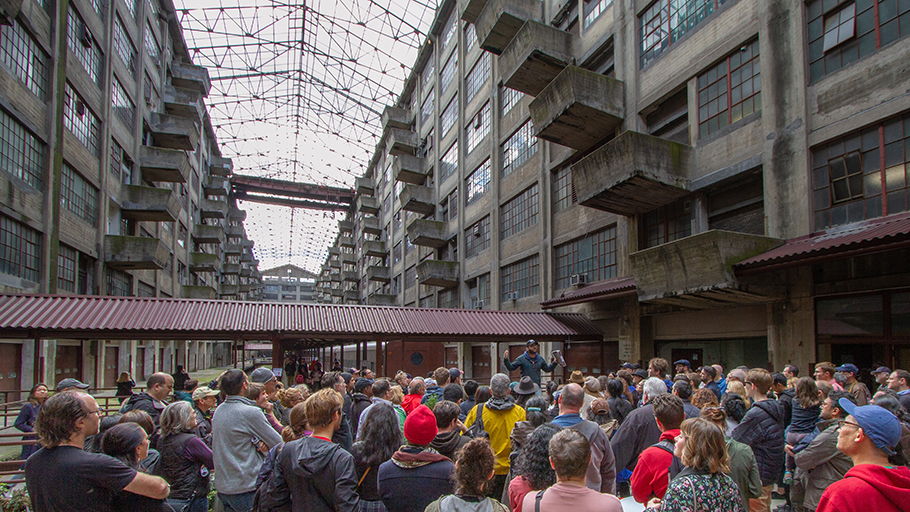 The Brooklyn Army Terminal (BAT) is the premier affordable hub for modern industrial businesses, entrepreneurs, and working creative families in New York City. The campus has recently completed renovations to open the historic property to the public and increase the community’s connectivity to the Sunset Park waterfront.

Constructed by the US Army in 1918-19, BAT served as a major military supply center for nearly 50 years. At its peak during World War II, 20,000 military and civilian personnel were employed at BAT. At that point, it functioned as the headquarters for the New York Port of Embarkation, the nation’s busiest port, sending more than 3 million men overseas from facilities around the region. Cass Gilbert, known for his Beaux-Arts and Gothic buildings like the Woolworth Building, was BAT’s principal architect, designing what was at the time the largest concrete structure in the world. Since BAT was acquired by the City of New York in 1981, New York City Economic Development Corporation has renovated the complex of buildings in phases to transform the facility into a modern, thriving industrial campus, with over 100 companies making everything from high-end chocolate to 3D-printed clothing and sustainable furniture.

Brooklyn Army Terminal is Open Access and can be visited on Saturday and Sunday, October 19 and 20, from 12-6pm. Tours with Turnstile Tours will be offered at 2, 3, and 4pm on both days. This year, in addition to the building’s awe-inspiring atrium, nearly 100 artist studios organized by ChaShaMa will be open to visit, as well as a number of ArtBuilt-Brooklyn artists and creative businesses.

Since 1995 ChaShaMa has played a central role in fostering strong artistic community in New York City by giving affordable studio space to over 15,000 artists and hosting thousands of public art events. ChaShaMa’s open studios will be open on both Saturday and Sunday, October 19 and 20, from 1-5pm. For more information, including a list of participating artists, click here.

ArtBuilt provides affordable space opportunities for artists, public arts programming and asset-building resources for artists, artisans, and neighborhoods in New York City and beyond. Stop by ArtBuilt’s office at BAT during OHNY Weekend to learn about their projects ArtBuilt Mobile Studios and ArtHome Workshops, and visit ArtBuilt artist studios and creative businesses.

Organized in partnership with the Brooklyn Amy Terminal and the New York City Economic Development Corporation.