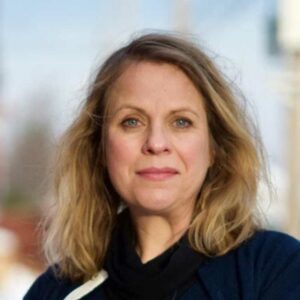 Pamela Puchalski is Executive Director of OHNY, where she extends the principles that OHNY stands for and celebrates—openness, access, and diversity—to neighborhoods across the city. Pamela led in strategic planning, program design, and fundraising for a range of organizations in the U.S. and internationally across public, private, and nonprofit sectors, including Rockefeller Foundation’s 100 Resilient Cities, Tishman Speyer, and The Africa Center. Her recent efforts to foster inclusive economic growth include co-founding the Global Institute on Innovation Districts. As Executive Director of The American Assembly, she incubated the national Middle Neighborhoods movement. She was also part of the core team behind Rockefeller Foundation’s 100 Resilient Cities and launched the Global Cities Initiative at Brookings Institution. Earlier in her career, she played an instrumental role expanding Urban Age into a permanent and influential research and executive training center, LSE Cities at the London School of Economics. Notably, Pamela launched New York’s Center for Architecture—raising the necessary funds and overseeing construction and its first years of operations and programming. The Center for Architecture, which is home to the New York chapter of the American Institute of Architects, served as the official welcome center for OHNY during its first few years. In addition to a M.S. in Urban Planning from Columbia University, she has degrees (Phi Beta Kappa) in Economics and Literature from the University of Maryland. Pamela lives in Brooklyn with her daughter and two cats.